Cliffs
A cliff or other physically impassible topographic feature often
marks the location of potentially important structure beneath. 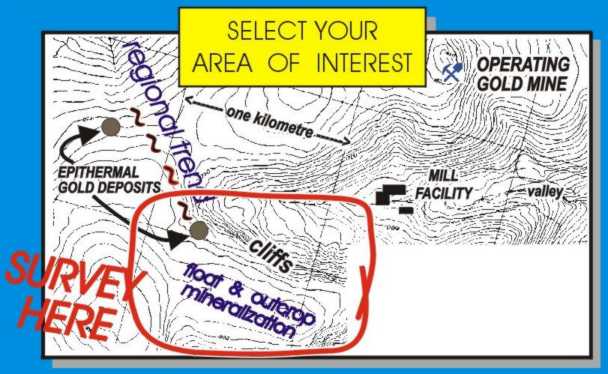 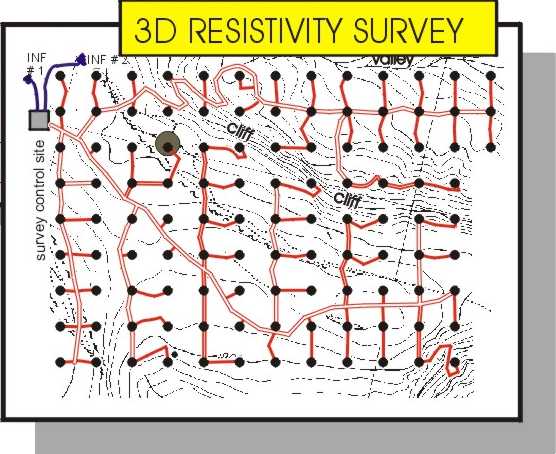 When the area of exploration interest was marked on this map at left, for 3D E-SCAN survey coverage, excluding the near-vertical cliff area was never a consideration. In fact, given the known strike of regional structures in the area, the cliff feature could host important exploration information, even mineralization.

Conventional collinear array surveys will seldom directly tackle a feature like this, preferring the easier route of running lines parallel to the cliff, - on top, below, or in both locations.
If cross-lines are demanded, each will require special installation of some extra wires (probably thrown down the cliff) to be used as the survey crew approaches the cliff, and again when the crew relocates to the other side to continue building each line of data.

For 3D E-SCAN, the cliff area is safely wired from both above and below, always with permission to offset one or two truly dangerous sites to a safer position. Notice in the image at right how a single wire descends a safe route to the lower area, where it connects to all of the lower-area electrode sites, including those up against the cliff. No time was wasted dealing with the steepest of cliff conditions, no extra wire was needed, no permission from head office... just common-sense re-routing of the nominal wiring plan to fit the conditions as found by the crew. From the established E-SCAN grid of electrodes, the entire cliff area would now be subjected to the same equally-spaced, multi-directional, high density measurement accumulation as the other parts of the grid. Objective 3D imagery would extend seamlessly through the cliff area, revealing any features of exploration or background interest.

This flexibility of layout extends to virtually any physical barrier that stands in the way of complete 3D survey coverage. Instead of a cliff, the obstacle could be an insulated leach pad, a river or a multi-lane interstate highway. All can be wired around or through, minimizing lost data points, and taking full advantage of the ability to offset electrode positions to available sites without compromising true 3D data set integrity.

Often, the occurrence of a cliff or other impassible feature isn't noticed until the survey team encounters it on the ground. Standard E-SCAN field procedures and equipment can usually work through the obstacle without delays or extra costs, while preserving the planned 3D data integrity.     Time, cost, risk?

In fact there are resistive anomalies aligned on and near the cliff face, at depth,
looking similar to those up on top which have revealed silica-gold mineralization. 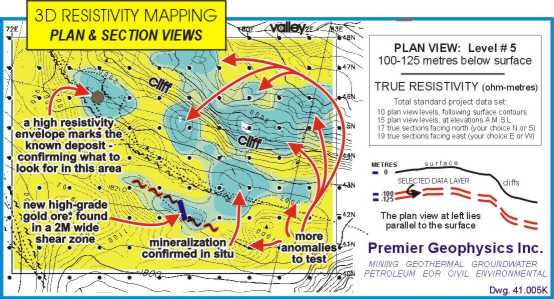