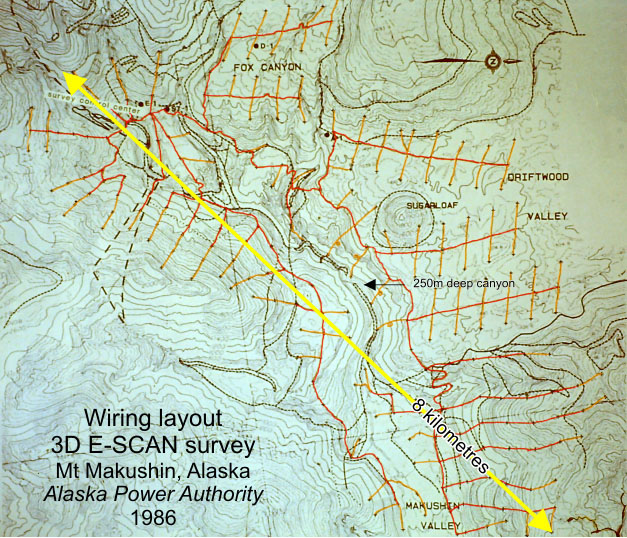 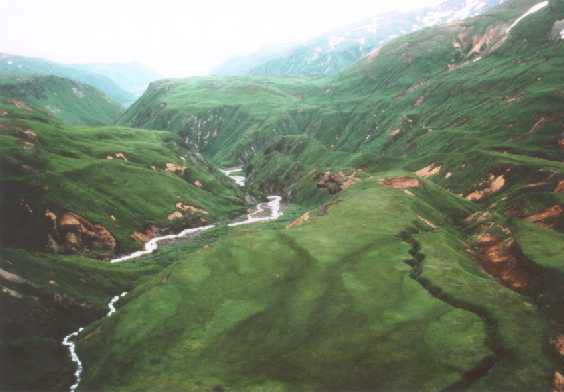 Conventional resistivity survey could not be operated where it was needed most in this terrain.     At right is the field wiring diagram for a 3D E-SCAN survey over 26 square kilometres of the lower slopes of an Aleutian volcano,- Mt. Makushin.

The single lines descending steeper slopes indicate wiring traverses originating from a ridgetop helicopter drop. Where there are stations thrown right and left from a central wire, local terrain is more easily walkable in all directions.

The layout map shows the strategic central location of the four electrode stations in the 250m deep canyon , and marked by a looped orange wire indicating that those were installed with direct helicopter help .

As usual, the wiring effort paid off with the acquisition of a dense, evenly-spaced, multi-directional raw data set. These data provided a firm answer to the question of whether the known geothermal system might extend down-valley into the more easily accessible areas. (It does not.)

Electronics arrived by air freight to Dutch Harbor airport. The heaviest supplies - wire and electrodes - were shipped in advance by ocean freighter from Seattle. Several tons of wire and survey equipment was lifted by helicopter directly from the deck of the freighter in Dutch Harbor , and then flown to the work site on the flank of Makushin Volcano. Seven round trips were needed. On completion, all wire and equipment was flown back out, leaving the survey area clean and unaffected.    Time, cost, risk? 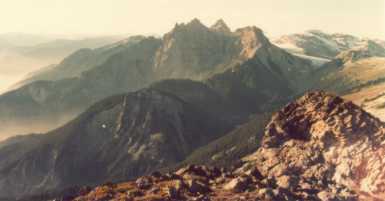 The largest stratovolcano in the northern Cascades, Mt. Cayley dominates the landscape in the crystalline Coast Range mountains, west of Whistler, British Columbia. The 3D E-SCAN system and supplies, plus an entire camp were flown onto the mountain.

The survey, conducted for the Geological Survey of Canada (a principal co-funder of E-SCAN research), was required to resolve an ambiguous result from a reconnaissance dipole-dipole array survey that supported 11 different plausible conductive anomaly sites.

It did exactly that, while completing this debut 3D E-SCAN survey on time and on budget. 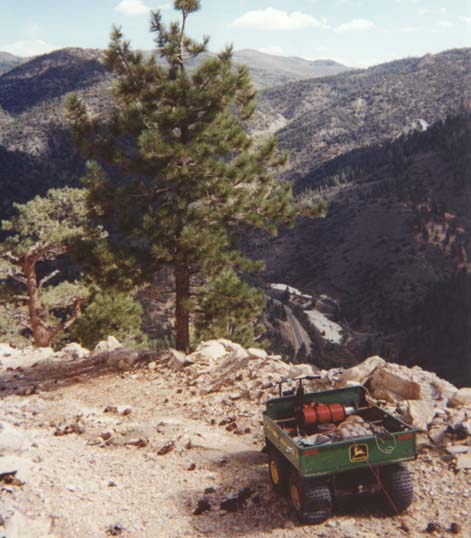 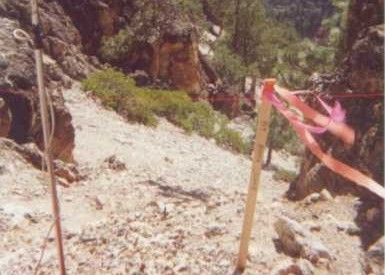 This square-mile 3D E-SCAN survey targeted gold-silver in an intrusive host. The setting is the Sierra Nevada, south of Lake Tahoe, California. Once again, extreme terrain is easily handled by the ultra-flexible layout capabilities of the 3D E-SCAN system. The five-wheeler positioned caches of wire and electrodes on the few drill roads encircling the top of the hill. From these caches, the 2-person crew installed wiring and electrode stations, downhill, on foot, using GPS.

As usual, all electrode installation locations are recorded in three dimensions, and represented in the topographically-correct 3D inversion mesh for processing. With station topography always recorded, there is no need for the "topographic corrections" of the type we are familiar with in interpreting conventional collinear array data.
Time, cost, risk?

With commercial accommodation nearby, this became a routine 3D E-SCAN survey, very fast in and out. Completion on-time, on-budget.

For this debut 3D E-SCAN survey, extra time was budgeted for instrument calibrations, and some operating experiments. Dependence on daily helicopter lifts turned out to be over-estimated,- much of the survey layout and shooting was done entirely on foot, operating from the alpine camp. 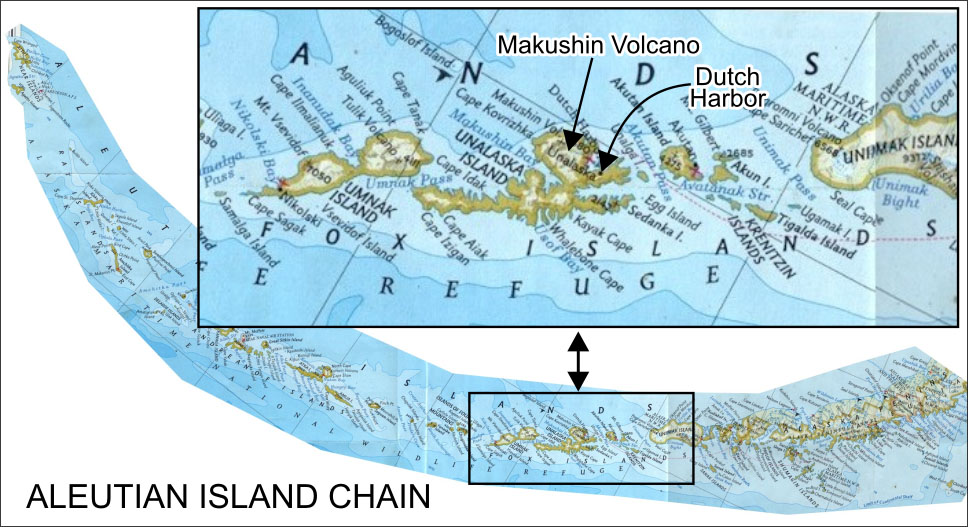 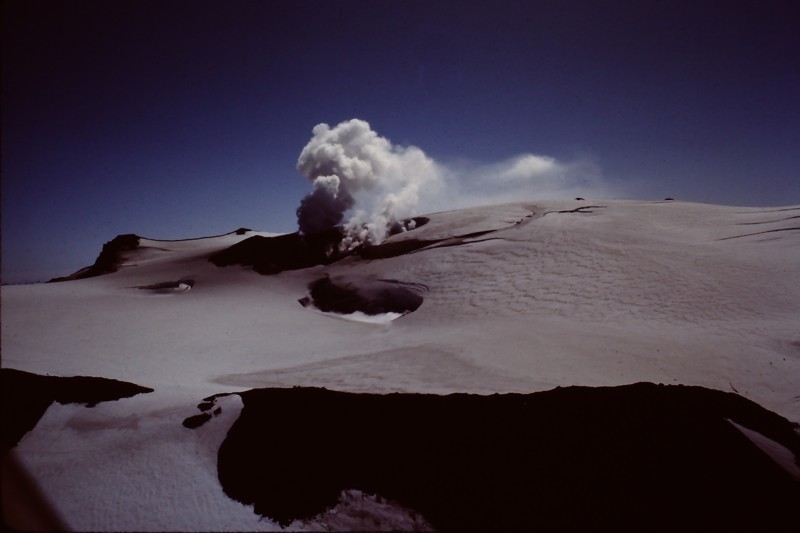 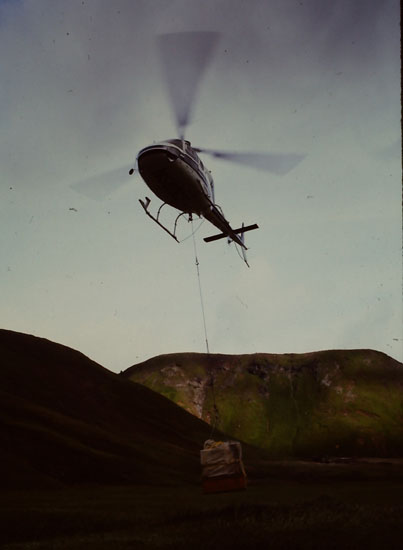 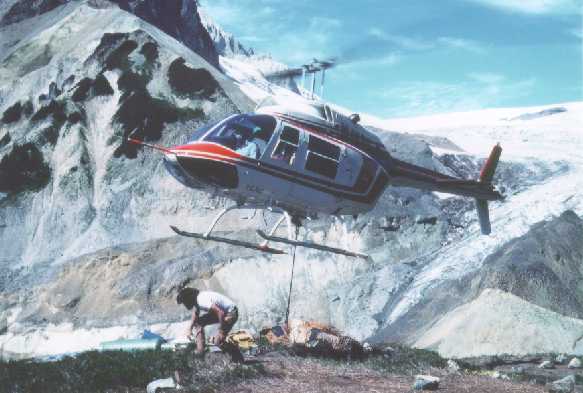 Dipole-dipole traverses (green lines) picked up conductivity (red dots) that was eventually
explained by 3D E-SCAN as originating far to one side of the traverses (red anomaly). 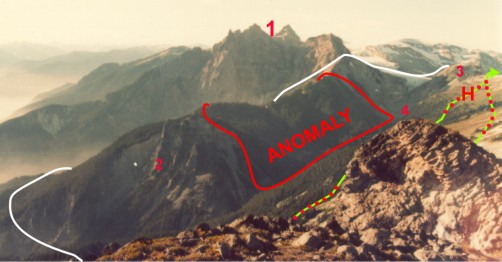 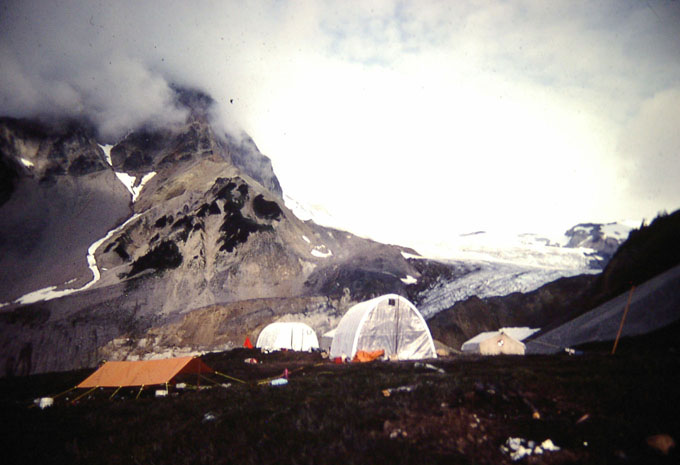 In the raw data image, the longer purple tics signify very conductive conditions, typical of the geothermal system already known in the area of these tics. Even in a single all-depths raw-data compilation plot like this, you can see a clear limit to the strong conductivity zone, at least two kilometres short of reaching the area (to the right) where road-building would be possible without extensive bridge construction. The issue had remained open due to the presence of hot fumaroles and a hot drillhole (A-1) in the favorable area, requiring some subsurface definition of permeability conditions (which E-SCAN provided). 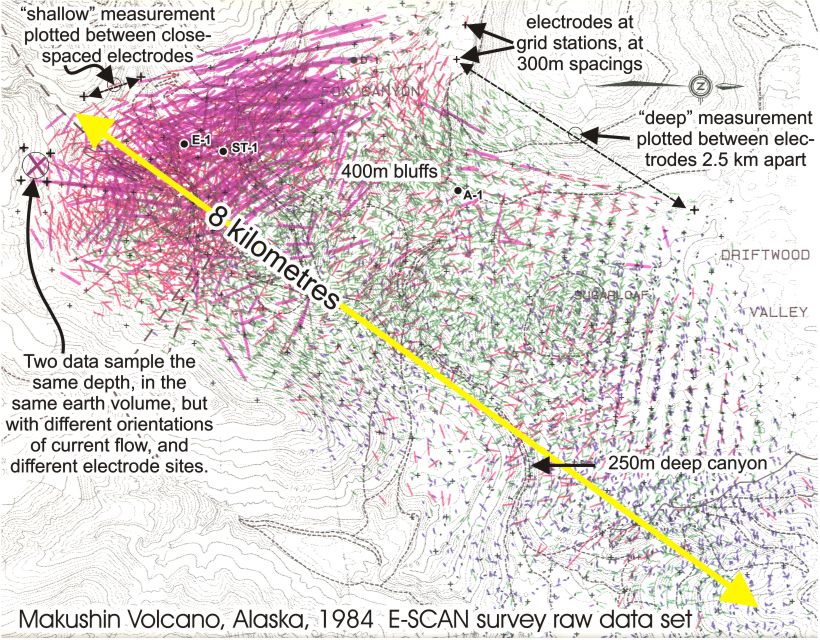 Orange is simplex wire; red is duplex wire for bi-directional digital network plus analog measurement circuit.
The entire system as shown is set up before "shooting" starts, to maximize completeness of the mapped fields. 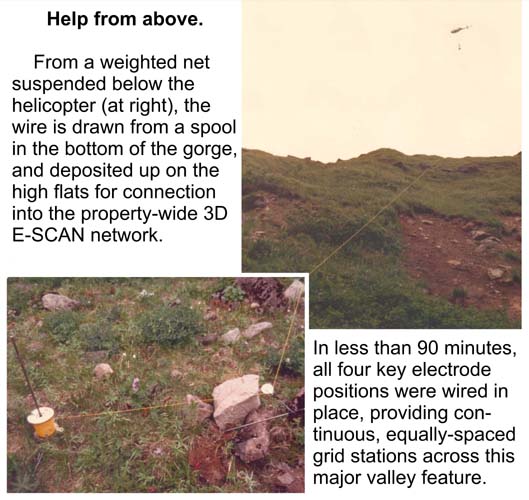 This project was planned from a desk in San Francisco using maps and what turned out to be accurate client descriptions of conditions. The project was a fixed-price contract, finished on time, on budget, and without excessive helicopter time.

Time: as predicted.
Cost: Fixed contract, no additional charges allowed.
Risk to client: none except possibility of helicopter cost overruns.