In 1983, a 3D E-SCAN resistivity (geothermal energy) survey conducted for the Geological Survey of Canada at Lakelse Lake, British Columbia, took on the challenge of potentially massive power transmission line interference. A corridor of 360,000 volt power lines supplying the Kitimat aluminum smelter ran not just nearby, but right through the wetlands that constituted the 3D E-SCAN survey area. The transmission line pylons were interconnected and grounded, as usual. Swamp areas underlain by conductive glacial clay beds exacerbated the situation. From any conventional geophysical standpoint, the potential for disruption and a failed survey in these conditions is substantial.
Recognizing the threat early in E-SCAN system engineering, design measures were taken. As a result, these powerline noise and distortion effects were anticipated and well-managed at four different levels, - by the E-SCAN instrumentation, its control software, the field survey procedures, and data processing techniques:
- Instrumentation was guarded against potentially damaging inductive transients (circuitry also used for lightning strike protection) so that it could do its job.
- Control software ensured that signal waveform sample integration occurred over periods representing multiples of <i>full cycles</i> of the 60 Hz power line frequency, effectively canceling all of the induced 60 Hz signal, the major component of powerline-introduced noise. This preserves signal integrity better than 60 Hz notch filtering.
- Survey electrodes were installed at a minimum distance from pylon locations as standard field procedure, minimizing predictable DC field distortion effects. Survey wires are not placed parallel to the power lines when passing underneath,- a common-sense avoidance of direct induction of large 60 Hz voltages into the E-SCAN network.
- In field data processing, any remaining distortion effects arising from individual electrode sites were identified through use of the massively overlapping characteristics of the multi-directional field data set. All remaining data obtained within or near the power corridor were subject to several levels of statistical and mathematical confirmation of an absence of specific distortion effects, as were all survey data in general.
Any data failing to pass these tests were culled, leaving in each case dozens of verified raw data to define and constrain that same sampled portion of the earth.
As a result, even the extreme conditions of actual and potential interference and distortion that occurred at the Lakelse survey site become "just another survey"
for 3D E-SCAN. 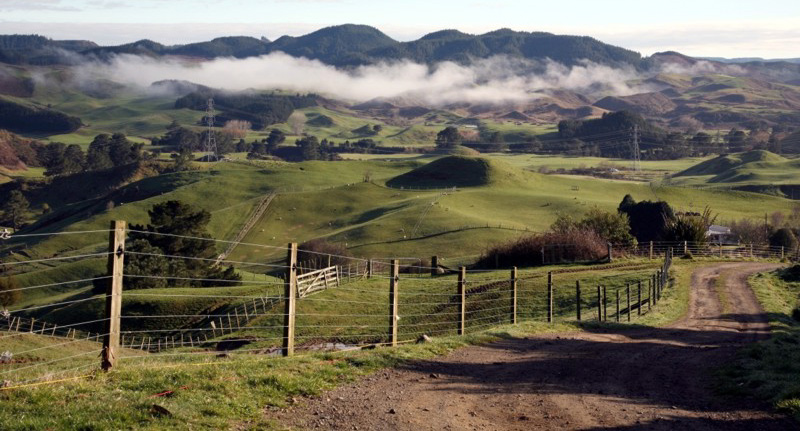 Only a true 3D (uniformly high density, multi-directional, high-signal, over-deep) field data set contains the many well-populated sub-sets of single-variable raw data needed to be able to analyze every datum on the basis of agreement agreement or disagreement with the majority sense of what must be the true in situ value of the specific, common half-space that is measured in so many different directions, from so many different pairs of electrodes, by the corresponding raw data subset. Any electrode situated on or near, or constituting the source of, distorting current paths, is soon exposed as the single common element in the one or more raw data measurements that are found to be in disagreement with the majority. Those defective data are culled. You can't do that with any other geo-electric survey data set in existence.
In New Zealand, survey setup included a switch to 50 Hz noise canceling in the measurement software setup file.
Nor can do this with any other geo-electric survey data set in existence. For every "bad" datum eliminated, 50 to 100 others, verified as "good", have a direct role in continuing to define and constrain the inversion algorithm's efforts to estimate the true earth resistivity for the area vacated by the bad datum. Even when the compromised data count reaches hundreds, sufficient data remain to ensure tightly-constrained definition of the corresponding areas. A 3D E-SCAN survey can lose more data than a conventional survey's entire data set, and still overwhelm the surveyed area with an even-distribution of hard-data values sufficient for the inversion to guide its objective earth-model creation.