Rivers
A river or river canyon should never limit raw data acquisition...
often it is a sign of potentially-important structure beneath. 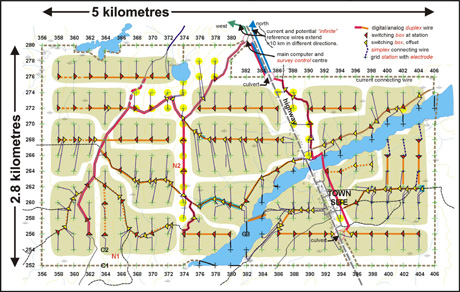 Right    Here is the actual field wiring diagram for a 3D E-SCAN survey (Quebec, 1999) where a river cuts the property, and possibly marks an underlying structure of exploration interest.

18 electrode stations were placed in the river-bottom from a GPS-positioned boat, then wired in to the land-based electronics network to complete the uniform grid spacing.

This maintains perfect continuity in the true 3D field data set (uniform distribution, high density, and multi-directional data set characteristics), as if the river wasn't there. Conventional traverse surveys would tend to be run parallel to the river to avoid frequent crossing delays and complications, but this would further limit the already-sparse raw data set in terms of proper investigation of possible linear structure under the river. 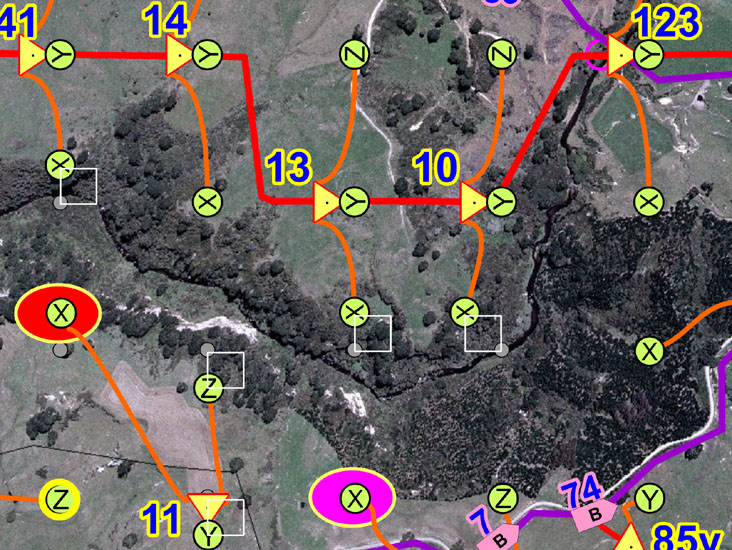 Not all rivers are wide enough to require a boat and river-bottom electrodes. Many of the rivers and streams on properties surveyed by 3D E-SCAN in New Zealand were too deep to walk across, but narrow enough in places that wire could be thrown by hand to the other side . Then the survey area on the other side could be wired and shot independently to complete the unbroken survey grid coverage. If an electrode station is required in mid-stream, the choice may be to install it at an offset equal to 1/4 of the nominal grid spacing.

At right, Ernie Holbek is winging the second wire across the river at 123Y (upper right on the layout map).    Time, cost, risk?

With reasonable road access on both sides of the river, managing the wiring changes required by the river made little difference to time and costs. Only occasionally would we have a dead-time while some crew had to move from one side of the river to the other - a total of 20 metres, by driving around the long way for half an hour.

Time and cost: This project was a daily-rate contract.
Total survey time and costs were
increased by 10%, not more.
Risk to client: none.

... so that the station continues to occupy a position at a node on the 3D inversion mesh that will be used later to process the 3D data, thereby eliminating entirely the post-processing adjustments that would be needed for a randomly-offset position.

Note the small white square denoting the actual size of the eventual 3D mesh elements. The small grey circle shows originally proposed grid station. Each crew member's GPS has pre-programmed positions for every possible 1/4 offset, i.e. every 3D mesh node. If the suggested electrode offset as shown in this layout map can not be reached, another alternate can be called up on the GPS and an attempt can be made to wire to that point. While airphotos are wonderful, it's the boots on the ground that tell the final story. Especially in bad weather conditions, we need to keep things simple, and waste no time.
Beyond throwing distance, a slingshot with fishing line could be used to pull a heavier wire across. A potato gun proved effective for a couple of areas where we couldn't even get close to the river due to thick brambles and treacherous slopes. The need for such crossings is minimized by being able to wire entire sub-areas on the other side from just one crossing.
A locally-hired skiff was used by one crew person with a handheld GPS to locate and install the 18 in-river electrodes, taking up about a half-day.

Time: negligible
Cost: no additional charges to client
Risk to client: none.